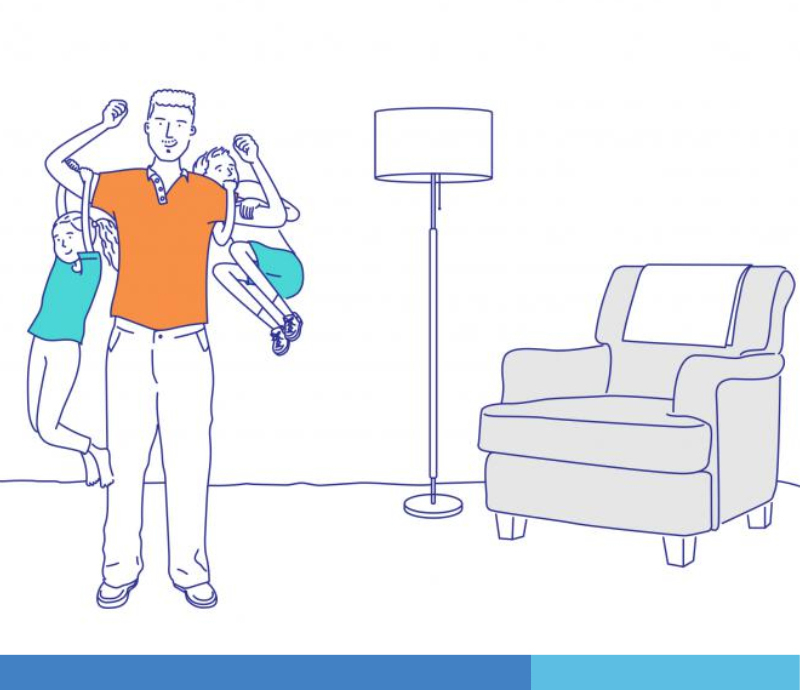 Here at Vantis Life, we firmly believe that not all heroes wear capes. There are thousands of men and women across our country who dedicate their lives to helping others – from firefighters on the frontline to dedicated teachers helping educate our kids.

But which professions do we see as our everyday heroes? And how do we value them in other areas? We surveyed over 2,000 Americans to find out who our heroes are, and how we view them when it comes to trustworthiness, importance, and how much they should be paid. The results highlighted some interesting points about how we value our everyday heroes, and how we think they should be recognized for their work.

The Most Heroic Jobs

No matter your walk of life, we all have opportunities to be heroes, whether it’s something as pivotal as saving someone’s life, or as simple as putting a life insurance policy in place to protect your family’s future. But there are some professions that the general public view as more heroic than others. To uncover what these are, Vantis Life asked respondents to our survey to rank 22 common US professions from most to least heroic.

The top five professions on this list earn their heroic ranking as they involve either saving someone’s life or risking your own. These two qualities were ranked as most important in defining what a hero is by our survey respondents.

The professions in positions six to ten on this list illustrate what else is important to us. From education to helping animals and putting food on our table, being a hero can mean a lot of different things.

Looking at these qualifiers for what makes a profession heroic may help us to understand the professions that did not rank so highly. Professional sports players, politicians, and actors were ranked as the least heroic professions in the USA.

To get an idea of how we value our everyday heroes in other areas, we also asked respondents to rank the professions based on how trustworthy they think they are.

Overall there is a strong correlation between heroism and trustworthiness. The only profession to appear in the top ten for trustworthiness, which wasn’t there for heroism, is stay-at-home dad. However, there are some differences in the rankings that are important to note.

While soldiers and police officers do still appear in the top ten most trusted jobs, their position changed a little when compared to the most heroic ranking. For example, according the survey, soldier, rated as the most heroic profession, is rated fourth place when it comes to trust. Similarly, police officer, ranked third for heroism, is seventh place on trust.

It‘s teachers and stay-at-home parents who are pushing forward when it comes to who respondents think are trustworthy. Lawyers also see a substantial difference between their heroism and trust ratings. Lawyers were ranked as the fourteenth most heroic profession on our list but dropped to twentieth on trust. Politicians were again ranked low, taking bottom place for trustworthiness.

In addition to looking at how far the public trust our heroes, we also wanted to see how important they feel they are in our day-to-day lives. Asked to rate each profession on this point, our survey respondents provided the following top ten:

Again, there are some interesting things uncovered when we compare this ranking with our heroism top ten. 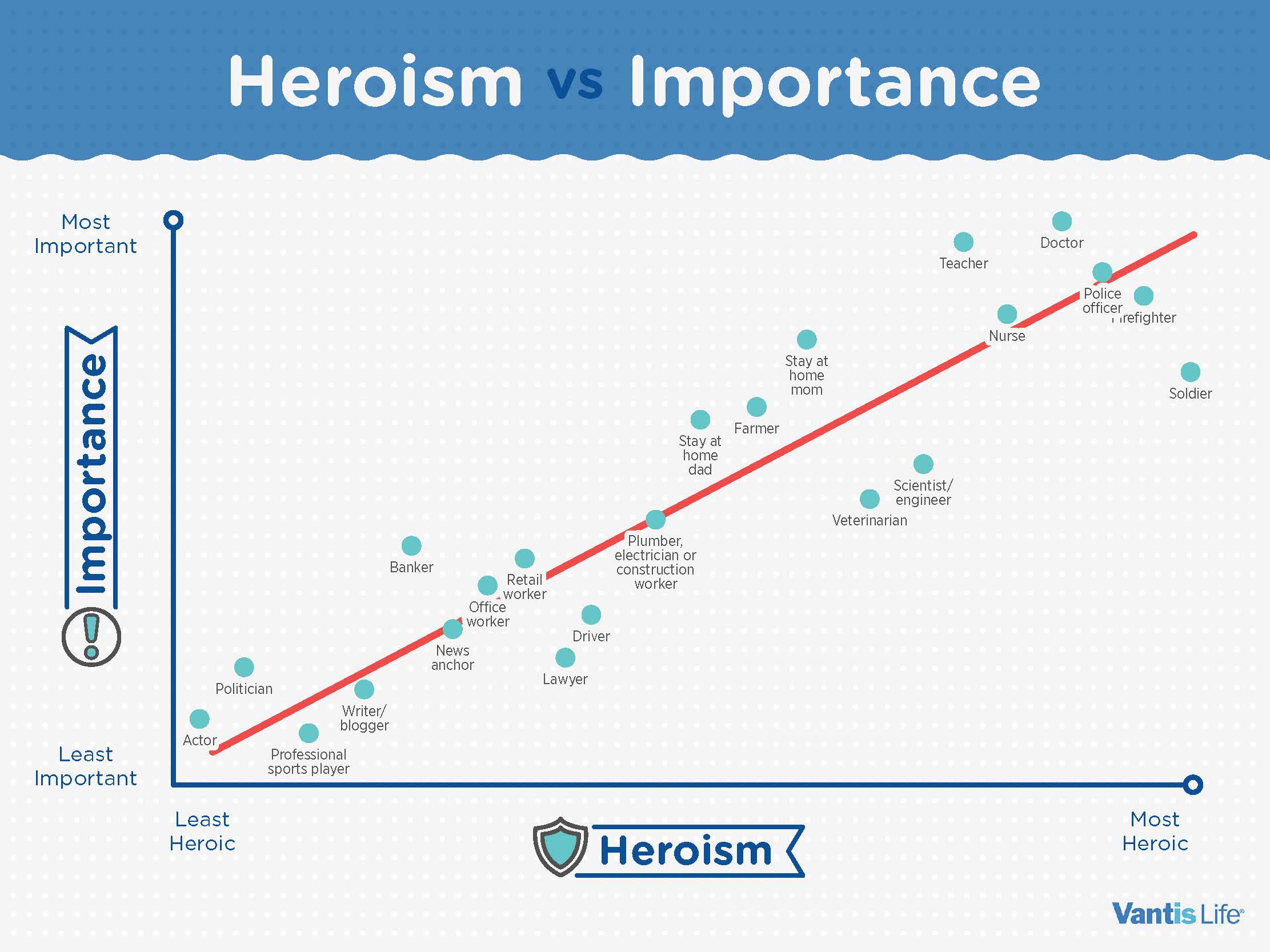 When it comes to importance, consumers seem to rate education, protection, provision, and care highly. The importance they place on education is reflected in teachers’ appearance at number two on this list.

Stay-at-home parents also rank higher than their heroic positions, due to their impact on the development of children in their care. Again, it is interesting to see the bottom of the table too. In this instance, it is professional sports players who come in last, with most people believing they have the smallest impact on their day-to-day lives. They are followed by actors, writers, and then politicians. Although politicians do rank low on this list, they are, at least, above the positions they earned on other factors.

When we quizzed people on how much monetary reward people felt their heroes deserved, they were almost unanimous in agreeing that heroic jobs deserved bigger paychecks.

The top ten jobs people think should be paid the most match up closely to the top ten for heroism:

The only new profession to appear on this list, compared to the top ten for heroism, is plumber. Stay-at-home mom is the heroic profession that people haven’t voted to include in the top ten highest paid. This makes sense since the role of stay-at-home parent is entirely unpaid. Even still, people want moms and dads to receive more pay than news anchors, professional sports players, politicians, and five other professions.

Unfortunately, these ideal pay rankings are not reflected in real-world salaries. When we compare the heroism rating with actual average pay for the profession across the US, the most heroic jobs often receive smaller paychecks than their less heroic counterparts.

Just four of the ten most heroic professions (doctor, veterinarian, nurse, and scientist) appear in the top ten best-paid professions. Meanwhile, jobs such as politician, actor, sports player, and news anchor, which all have low heroism ratings, make the top ten on real-world pay.

This data has revealed values that are important to the American public, and what makes us value certain professions above others. It indicates that these values are not always recognized by pay in the way we hope they would be. People seem to feel that higher salaries should be given to those who risk their lives and save the lives of others in the course of their work.

This study highlighted that people who take on high-risk jobs that require sacrifice of safety and time are indeed seen as heroes.  The survey results offer interesting insight into the values we appreciate in various professions, and prompt discussion around whether the most heroic are appropriately compensated.  Vantis Life believes that everyone can be a real "life hero" to his or her family by protecting them with the right amount of life insurance.